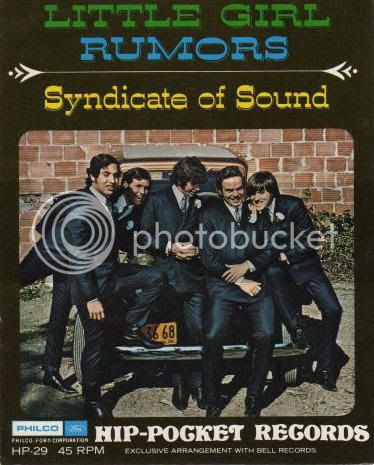 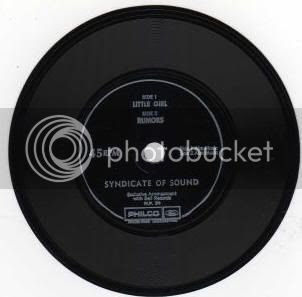 MP3 File
Syndicate of Sound
Little Girl
HP-29
1967?
Hip Pocket Records were a short lived record format introduced by Philco in 1967. These flexi discs were about 3 inches wide and played at 45 RPM. Apparently they only lasted a year or two and never took off commercially. After buying this one recently I can see why. The thing is so small, thin and flimsy I can't get it to work on any record player in the house (I have 3). A little aggravating but still a nice curiousity. The music file provided here is taken from a reissue 45.

*Edit* I tried this again using the coin trick mentioned in Comments. Here is the actual sound file from the hip pocket disc. It works (sort of). See what you think...


MP3 File
p.s. this sounds pretty good if you synch up and play both files simultaneously...
Posted by Jukeboxmafia at 3:25 AM

I tried this and it sort of worked (see edit) Thanks