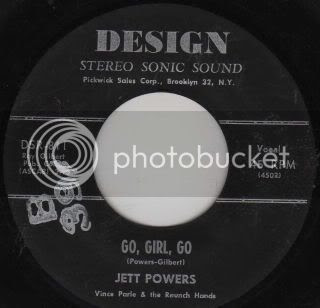 MP3 File
Jett Powers
Go, Girl, Go
Design - 811
1958
I found this record at my Grandmother's house, in a box of singles that belonged to my uncle when he was a teenager. Go, Girl, Go is a rockabilly classic, produced by Bumps Blackwell and contains some of the wildest guitar you will ever hear on a fifties era recording. Jett Powers a.k.a P.J. Proby, was a songwriter and later recorded an album backed by a bunch of british session musicians who subsequently gained some success when they changed their name to Led Zeppelin...
Posted by Jukeboxmafia at 12:29 PM 7 comments:

Email ThisBlogThis!Share to TwitterShare to FacebookShare to Pinterest
Labels: Rockabilly 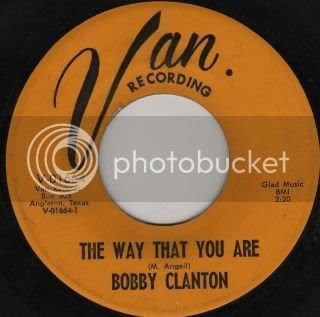 Van Records may have been based in Angleton, Texas, but this recording is pure South Louisiana! Not sure who Bobby Clanton is (any relation to Jimmy Clanton?) and some initial web searching turned up next to nothing. This is a haunting ballad in the classic Swamp Pop style. The only other 45 I've seen on this label was a garage rocker, so go figure...
If you are not familiar with the phrase "Swamp Pop" go Here
for a quick education.
Posted by Jukeboxmafia at 10:54 PM 7 comments:

I'm in the Mood for Nappy Brown 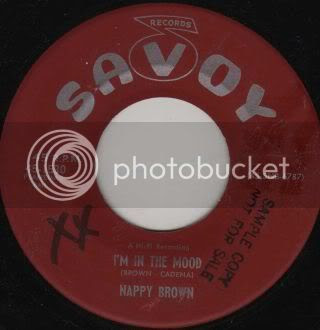 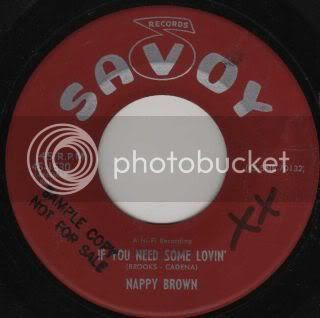 If You Need Some Lovin'

MP3 File
Nappy Brown is one of the most powerful and unique R&B vocalists of all time. His gospel drenched style was an influence on Ray Charles, who famously covered Brown's song "Night Time is the Right Time". This is a double sided killer on Savoy from 1958.
Posted by Jukeboxmafia at 1:19 AM 3 comments: