Cardboard Records: A Part of this Balanced Breakfast (pt. 1) 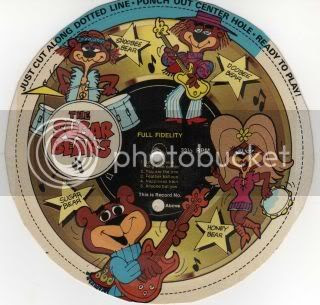 These are fun. Remember those little cardboard records you used to cut from the box of your favorite breakfast cereal? Well, me neither, actually, but here's one from The Sugar Bears. The record indicates that this is song #2 (among 5 that you could collect) and remarkably, it actually rose to #51 on Billboard's Hot 100 chart in 1972. The Sugar Bears are also known for employing Kim Carnes of "Bette Davis Eyes" fame. I found a few of these recently (more to come soon) and I must say that they are in surprisingly great shape for their age. This one is a rather bland but upbeat pop tune that sounds like is was written and performed by a commercial jingle company (probably not far from the truth.) The sound quality is decent, considering the source, although you can here the record slip occasionally. Pretty neat!
p.s. Check out the Internet Museum of Flexi Records in the links list on the right side of the screen for more examples... 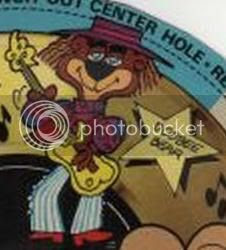 Of course, me being old, I do remember these things, and remember my dad getting pissed that I played one on his turntable instead of my piece of crap. Also, I never cut it out in a circle but rather a square since even then I was a lazy bastard.

Didn't notice that the bears were all pot smoking fiends back then, however... ;-)

Yeah I agree. Those Sugar Bears need to get off the weed, and do right by the Lord! I would also like to request that from now on, everybody refer to me as 'Doobee Bear'.

Doobee Bear! I remember those from a decade before the 70s. Never cut them into a circle, either. And never got them to play, as the paper backing would warp so bad the stylus would slide off the thing.

A museum to this? Quite a surprise that much interest in it.

I was pretty dismissive of these things when I first started finding them, but I have since come to be fascinated by them. Stay tooned for more...

Anyone notice the unsettling resemblance between Doobee Bear and Jeff Baxter?