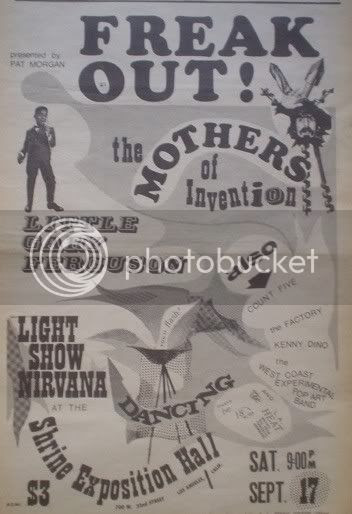 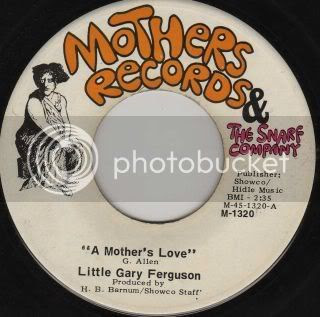 On the video (from 1966) Gary appears to be about 8 or so and does his best attempt at a James Brown style stage act. A few years later this single was released and he appeared on a bill with Frank Zappa, the Count Five and others (see poster above.) After that, who knows? I can find very little info about him online. Anyway, this funky track, in kind of a Jackson 5 groove, is pretty cool with Gary singing (a little creepily perhaps) about loving those kisses and hugs from Mom! Check it out...
Little Gary Ferguson
A Mother's Love

*edit* Okay, so upon further consideration, maybe I played down the creepiness of this song too much. Gary is singing in a very adult, sexual sounding way about loving his mother. Perhaps his handlers thought this would play off as cute, since he is a child, but something went wrong somewhere...
Posted by Jukeboxmafia at 10:24 PM

Wow. A creepy song about motherly love. The lyrics are a bit frightening.

nice little funky groove from a song that otherwise makes you want to take a shower to wash away the images from the lyrics.

Wow! Maybe it was a love song before some producer type thought it was inappropriate for a youngster and slapped the "mommy" veneer on it.

Yeah, I agree. They should have just had the courage to let him sing the song straight...

I have known Mr. Gary Ferguson for years........Hes a good friend of mine. He Still performs occassionally in the Dallas, Texas area.

On 2nd listen, I'm thinking it's not so creepy. The chorus says "Next to your kiss and your hug ain't nothing better - BUT a mother's love". So it's little girl hugs vs. love from Mom? Also put out on Mothers Records, it was a nice tie-in. I like it. And produced by HB Barnum! Love your blog BTW.

Hmmm, Interesting. I hadn't thought of it that way. Perhaps you're right. Thanks for stopping by!

I use to love that song! I remember singing it as a preteen and being chastised by mom. Not creep, but rather adult lyrics for a nine year old! I believe he had another minor hit, does anyone remember what it was?

Hey do you have Garys Hit, Work Gary Work? Now that was the Jam

I grew up in Dallas when Little Gary Ferguson was hot. In fact, I went to school with his sister Vanessa. The song; "Work Gary work" was top notch. I can remember buying the 45 down at Rains record store in Glendale shopping center. I would give anything to have my childhood record collection back. One more thing about Little Gary Ferguson. We all grew up in the southern part of Dallas, Texas in a community called Oak Cliff. Gary's family lived in the Singing Hills area of Oak Cliff.

he was saying quite a bit for a child singer, next to the kiss and hugs of his girl friend nothing is better but A Mother's Love. Most of Gary's songs were wrote by the late Al Braggs who was a singer himself so maybe he wasn't thinking about the age. Gary and his parents are still living in Dallas in Oak Cliff in the home we lived in during our middle and high school years. Vanessa ( Gary's sister)

Wow, thanks for commenting Vanessa! Is there any information you can give us on what became of Gary and his recording career?